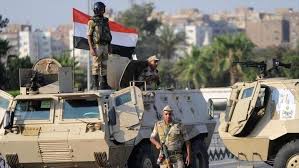 Egyptian security forces have killed a group of suspected terrorists in North Sinai who were plotting to carry out a series of attacks against police and army troops in the border region, the interior ministry said, according to ahram.org.eg

The men were killed after they opened fire from their vehicle on security forces who approached them in the Galabana area, the ministry said in a statement.

The terrorists were found in possession of ammunition, automatic weapons and materials used in making explosive devices, it said.

The ministry did not reveal the number or the identity of the suspects but said all of them were killed, adding that another terrorist was killed nearby after he opened fire on security forces.

A total of four policemen were injured in the two shootouts, it added.

The ministry released photos of bloodied bodies with their faces concealed lying on the ground.

Egypt is fighting an Islamist militancy based in North Sinai which intensified in 2013 following the ouster of Islamist President Mohamed Morsi of the Muslim Brotherhood.

Crushing the militants, who have mainly targeted police and army personnel, and restoring security has been a key priority of Egyptian President Abdel-Fattah El-Sisi.

Egyptian security forces launched an extensive security operation in February 2018 to eliminate the militants, killing hundreds of them in raids ever since.