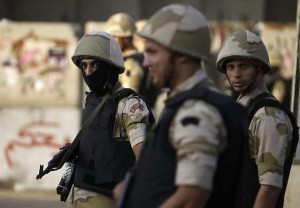 The announcement by the army spokesman on his Facebook page came hours after a police officer was killed and four others were wounded when their armoured vehicle hit a roadside bomb in El-Arish, the provincial capital, security and medical sources said.

The army said it had received intelligence that ‘”terrorist elements were transferring rocket-propelled grenades, machine guns and C4 explosives from Rafah to the town of Sheikh Zuweid in an attempt to carry out an attack against security forces.

Egypt is facing a Sinai-based insurgency that has killed hundreds of policemen and soldiers since the army toppled Islamist President Mohamed Morsy after mass protests against his rule in 2013.

The most active militant group is Sinai Province, which has pledged allegiance to Islamic State, the Sunni group that controls large parts of Iraq and Syria.

Egypt executed six members of Sinai Province for carrying out an attack on soldiers near Cairo last year, their lawyer said in May.