You are here: Home / Mediterranean / Egypt extends state of emergency in North Sinai until April 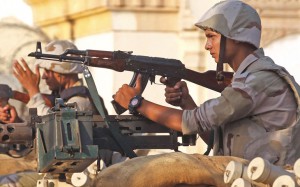 Egyptian President Abdel Fattah El-Sisi has extended a state of emergency in parts of the North Sinai governorate for three more months starting from January, the state’s official gazette reported.

The president’s initial decision to impose the state of emergency came in August 2013 when violent unrest gripped the country following the ouster of president Mohamed Morsi.

The decision has since been extended for three-months at a time in January, April, July and October of 2015.

The extension will be in effect starting January 27.

The state of emergency covers El-Arish, Rafah and some surrounding areas.

The decree states that any citizen found in public during curfew hours will be imprisoned according to a 1958 law.

Some cities in North Sinai have been the epicentre of an Islamist insurgency that spiked after the 2013 ouster of Islamist president Morsi following mass protests against his one-year rule.

The violence has killed hundreds of soldiers and policemen in the restive region.