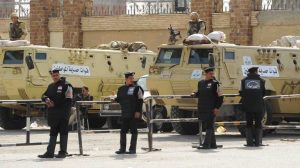 Egyptian cabinet decided to extend the state of emergency in the country for three more months, state-owned Ahram newspaper reported.

The decision to extend the emergency state was made during a cabinet meeting.

On April 11, Egypt’s parliament approved a presidential decision for a three-month state of emergency, days after church bombings killed at least 44 people in the North African country.

Meanwhile, the Egyptian interior ministry announced on Thursday that its forces killed seven terrorists in connections to anti-Christian attacks.

The ministry said the terrorists, who were hiding in a mountainous area in the Upper Egyptian governorate of Assuit, exchanged fire with police forces before they were killed.

Egypt has been fighting a wave of anti-security attacks following the ouster of the Islamist leader Mohamed Morsi in 2013.

Those attacks, which were mainly centered in Sinai while rarely happened in Cairo and other governorates, have killed hundreds of soldiers and policemen as well as Coptic Christians.

A local affiliate of the Islamic State group in North Sinai province has claimed responsibility of most of the attacks.