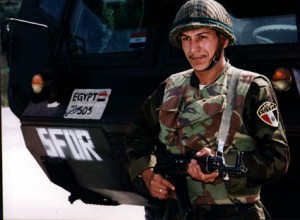 Egypt has extended by three months a state of emergency imposed on parts of Northern Sinai as the military mounts counter-insurgency operations against Islamist militants, the government said on Wednesday.

Insurgents have killed hundreds of soldiers and policemen in Sinai since mid-2013 after the overthrow by then-military chief Abdel Fattah al-Sisi of Islamist President Mohamed Mursi following mass protests against his rule.

The state of emergency extension, announced by now President Sisi in a written decree on Wednesday, will be implemented in Rafah, al-Arish, Sheikh Zuweid and surrounding areas starting retroactively from Tuesday and also extends a night-time curfew.

The measure was first introduced exactly one year ago after 33 security personnel were killed in an attack at a checkpoint in northern Sinai. It was extended by three months in January, April, and July. The attack was claimed by Sinai Province, an affiliate of Islamic State, which earlier changed its name from Ansar Bayt al-Maqdis.