You are here: Home / MidEastGulf / Egypt destroys over 1,400 tunnels in North Sinai 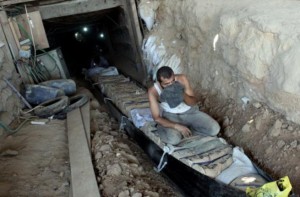 A total of 1,429 border tunnels connecting Egypt to the Gaza Strip have been destroyed over the past year and a half, the Egyptian armed forces said on Sunday.

The tunnels were “used by terrorists and criminals” for “smuggling” purposes, the armed forces said in a statement.

The densely populated Gaza Strip, home to 1.8 million, has been under siege since 2007 when Islamic Resistance Movement (Hamas) seized control of the strip.

Egyptian authorities say the tunnels are used to smuggle arms to militants in the Peninsula.

However, a report by the World Food Programme (WFP) in February 2014 said that since 2007, tunnel trade represented “the main supply and commercial trade route for goods into Gaza.”

The WFP report said that the “closure of the tunnels by Egypt in July 2013 hampers the few remaining drivers of economic growth in the Gaza strip.”

On Saturday, the Rafah border crossing which connects Egypt to the strip was opened in both directions by Egyptian authorities and will remain open through Monday.

The Palestinian Embassy in Cairo said this will allow the travel of “humanitarian cases”, patients and holders of residencies outside the strip, adding that the temporary opening comes after “intensive contact” with the Egyptian side.

In April, Egypt’s cabinet approved a draft legislation proposed by the president to punish those who dig or use border tunnels for communication with foreign countries or to help persons, goods, equipment or machines move in or out of the country, by life in prison.