You are here: Home / Mediterranean / Egypt could intervene militarily in Libya to secure border 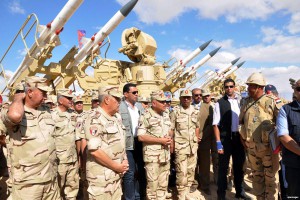 Egypt could intervene militarily in Libya to safeguard its own national security and stability, the former assistant foreign minister for Arab Affairs, Ahmed Al-Quesni, has said. A probable Egyptian intervention would be focused on securing its border through air surveillance, monitoring military operations and securing Libya’s ports.

“Egypt will not let the oil ports be taken away from the Libyan people,” Al-Quesni told Alwasat, “and deploying Egyptian troops would send a message to Western countries, forcing them to think twice before intervening.”

Suspicions about the Egyptian air force intervening in Libya already have been supported by recent reports of unidentified aircraft bombing troops fighting against renegade Field Marshall Khalifa Hafter, who seized control of the major oil ports in the country from the Petroleum Facilities Guard this month. Egypt has supported the Tobruk-based parliament endorsed by Haftar and any intervention on its part would likely be rejected by the UN-backed Government of National Accord (GNA).

Cairo last hosted Hafter in July, when preliminary discussions took place with a Russian delegation promising him and his troops training support and weapons supplies.