You are here: Home / Senza categoria / Egypt could buy French Mistral warships with Russian equipment aboard 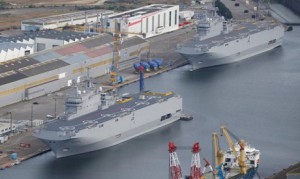 Russian officials have told their French counterparts that Russian equipment on two Mistral class assault ships can be left intact if the ships are sold to Egypt or India, the US publication Defense News has reported.

A $1.1 billion deal to sell the French ships to Russia fell through last year after Paris pulled out following the outbreak of the Ukraine crisis. The deal would have been the biggest arms sale by a NATO country to Russia.

The Mistral class ships are fitted with Russian telecommunications and missile control systems which the French had installed as part of the incomplete deal.

The cost of removing the equipment would be $64.1 million and would be swallowed by France.

After the deal with Russia was abandoned, Canada, India, Singapore and Egypt emerged as contenders to strike a deal over the French aircraft carriers.

France has been eager to find a new buyer, with maintenance costs for the ship amounting to $5.6 million a month.

Egypt has emerged as a top contender after a well-placed French source confirmed Cairo and Paris were in advanced talks last month, according to Reuters.

“There are indeed discussions that are relatively advanced to take the two Mistrals,” the source said.

The source also said any French-Egyptian deal would likely be financed partly by money from Gulf states, who consider Egyptian president Abdel-Fattah El-Sisi a bulwark against the now-outlawed Muslim Brotherhood group.

The ship can carry hundreds of troops, transport dozens of vehicles and tanks, and up to 16 helicopters. Its most important feature is a modern command and control system that can direct the movement of vehicles during battle at sea or on land.

If they do go to Egypt the Mistral class assault ships would represent some of the most advanced military equipment in the Middle East.