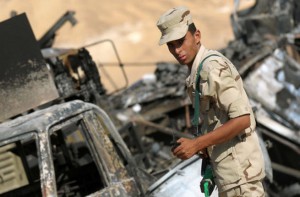 Two soldiers and 55 “terrorists” were killed on Tuesday in an ongoing joint security operation in al-Arish, Rafah and Sheikh Zuweid of North Sinai, said an army statement.

The statement added that 12 were injured in a fire exchange between the security forces and “terrorists” while 35 suspects were arrested following the clashes.

Tuesday marks the ninth day of an operation launched by joint police and military forces, dubbed the “martyr’s right” operation.

Since the beginning of the operation on September 7, a total of 415 militants have been killed and more than 300 arrested.

North Sinai militants have stepped up attacks targeting security forces since the ouster of Islamist President Mohamed Mursi in July 2013, after mass protests against his rule.