You are here: Home / Europe / Egypt calls on anti-Islamic State coalition to intervene in Libya 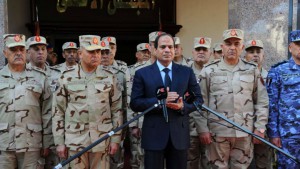 An aide to Egypt’s foreign minister has called on the US-led international coalition against Islamic State (IS) to intervene against the militant group in Libya, as it has previously done in Syria and Iraq, wrote Ahram.org.

Ambassador Abdel-Rahman Salah said that “terrorism should be dealt with comprehensively wherever it exists”, according to a foreign ministry statement issued on Thursday.

Salah, who took part in a meeting with the anti-IS alliance in Jordan on Wednesday, said that any military action against the militant group should aim to crush it, not merely force it to move its base of operations.

Since last summer, the anti-IS alliance have launched airstrikes against IS in Syria and Iraq, but not in Libya.

Over the last months, IS has emerged as a participant in the Libyan conflict, as two rival governments – one internationally recognised in Al-Bayda, the other Islamist in Tripoli – and their allied militias continue to fight for control of the country.

In mid-February, Egypt launched air strikes on IS group targets in Libya’s Derna in cooperation with the Libyan army, in response to IS publishing a video of the beheading of 20 Coptic Egyptians, allegedly near Tripoli.

Egypt has also pushed for a Security Council resolution to lift a four-year arms embargo on the internationally-backed Libyan government, so that it can fight IS militants.