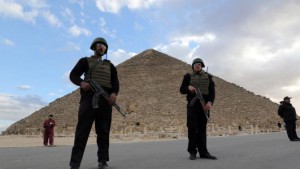 Two Egyptian police officers have been shot dead in Cairo as they made their way to work near the Pyramids of Giza.

The Interior Ministry published pictures of the two men on its Facebook page, saying they had been travelling through the district in their car.

“Immediately after the incident several moving and fixed checkpoints were deployed in the Muneeb area in order to crack down on the attackers and catch them,” a security source was quoted as saying by the state news agency.

It came after two men attacked a hotel in the Red Sea resort of Hurghada, wounding two Austrians and a Swede.

Isis claimed responsibility for a separate attack on the Three Pyramids Hotel in Cairo on Thursday, where no one was injured.