You are here: Home / Mediterranean / Egypt: at least 10 people killed in attack on church in Cairo 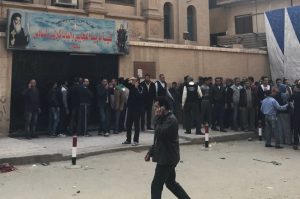 Egypt’s Health Ministry spokesman says at least 10 people, including eight Coptic Christians, have been killed in a shootout outside a south Cairo church, like reported by nypost.com.

Khaled Megahed says Friday’s attack took place when gunmen on a motorcycle opened fire outside Mar Mina church. One gunman was shot dead as was a security officer, he said.

Egypt’s state-run MENA news agency, citing an unnamed Interior Ministry official, said the other assailant fled the scene and was being pursued.

The spokesman for the Coptic Orthodox Church said in a statement that at least six people were killed in the attack including five Copts and a policeman. It also said there was a separate attack on a store in the same neighborhood of Helwan that killed two Copts.

Egypt’s Christian minority has been targeted by Islamic militants in a series of attacks since December 2016 that left more than 100 dead and scores wounded.