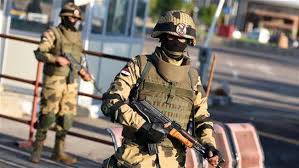 Egyptian armed forces have thwarted a terrorist attack in northern Sinai and killed 18 terrorists during a security operation, military spokesman Tamer Rifai said in a statement on Wednesday.

“Our military has successfully thwarted a terrorist attack on a security post in the Bir al-Abed area in northern Sinai using four vehicles … As a result of the operation, 18 militants were neutralized, including a suicide bomber, and four cars were destroyed, three of which were rigged with explosives”, Rifai said in a statement.
According to the spokesman, two Egyptian servicemen were killed and four others were injured during the operation.

In May, the national armed forces killed 19 militants during several raids, with five servicemen killed and injured.

The north of the Sinai Peninsula has long been Egypt’s most tense region due to the presence of violent extremists, who frequently conduct attacks against police and army on the peninsula. The Egyptian military has been leading a large-scale counterterrorist operation in the area for over two years now.