You are here: Home / Mediterranean / Egypt army says it killed over 70 jihadists in North Sinai 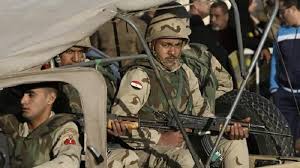 Egypt’s army announced Sunday that more than 70 alleged jihadists have been killed in recent military operations in North Sinai, the location of an insurrection affiliated to the Islamic State group, like reported by toi.com.

A statement by the Egyptian army said that the operations had targeted alleged “homes of terrorists” and “takfiri elements” leading to “the deaths of 73 takfiris in northern Sinai” between July 22 and August 30.

Four other “takfiris” were killed, the statement added, without elaborating.

The term “takfiri” is used by Egyptian security officials to refer to jihadists.

During the clashes “three officers and four soldiers were killed or wounded,” the statement said, without providing further details.

More than 930 suspected militants have been killed in the region along with dozens of security personnel, according to official figures.

No independently verified death toll is available and the region is largely cut off to journalists.

However, the Egyptian government has organised occasional media visits, closely supervised by the military.