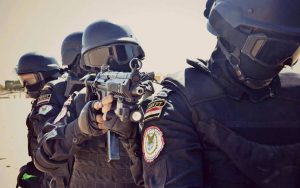 Egyptian police units raided a training center of armed Islamic extremists in the city of El Arish, the capital of the North Sinai Governorate, like reported by plenglish.com.
A statement from the Ministry of the Interior details that the suspects received training to use weapons and make explosive charges in an abandoned building in the area of Al Rayisa.

During the operation, the police officers shot down eight armed irregulars, who, according to the note, were involved in several attacks perpetrated in the Sinai.

The identity of the dead was not revealed by the ministry, which, along with the Army, is the only reliable source of information about what happened in that area, given that in the north of Sinai a military exclusion state that eliminates the access of the press rules.

In that peninsula, the only truly turbulent area in Egypt, the armed extremist group Ansar Beit Al Maqdis, renamed as Wilayat Sayna (Sinai Peninsula), has been operating for about four years, after expressing allegiance to the Islamic State.

At this moment in the Sinai, the Army and Interior Ministry troops carry out intensive counter-terrorism operations following presidential orders, according to which the activity of the armed Islamic extremists in the area must be eliminated before three months.