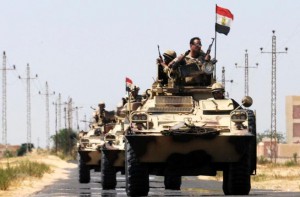 The Egyptian armed forces announced the commencement of the second phase of the army’s latest operation “Martyr’s Right” in North Sinai in the cities of Sheikh Zuweid, Rafah, and Arish.

“Martyr’s Right” is the largest and most comprehensive operation aimed at rooting out and killing militants in North Sinai since the group affiliated with ISIS (Daesh) mounted their largest attack in months on Egypt’s security forces in July.

According to Al-Ahram Arabic news website, the second stage, which deliberately coincides with the 42nd anniversary of Egypt’s victory in the 6 October War, includes the commencement of numerous development projects and planned execution of reconstructions in North Sinai in the cities of Sheikh Zuweid, Arish, and Rafah, among others.

The armed forces also announced the dispatch of a convoy loaded with medical supplies and construction materials, as well as food for the people of Sinai.

Forces are preparing for the construction of the new town of Rafah, which will include 1200 housing units as well as a number of hospitals and schools.

North Sinai, which borders Israel and the Palestinian Gaza Strip, is a stronghold of Islamist militant group Ansar Beit Al-Maqdis, which pledged its allegiance to ISIS (Daesh) in 2014.

The Egyptian army has been battling a decade-long militant insurgency in North Sinai, which has spiked in the last two years following the ouster of Islamist president Mohamed Morsi in July 2013.

The Egyptian army announced the end of the first stage, which lasted 16 days, on 22 September after the “achievement of its primary objectives,” which reportedly included the killing of over 500 militants and destroying various “terrorist” hideouts and artillery storage facilities in North Sinai.

Phase two of the operation, according to a statement released by the army after the conclusion of the first phase, will “pave the road for creating suitable conditions to start development projects in Sinai.”