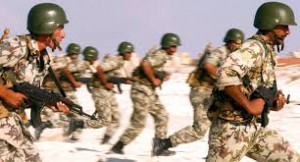 At least 30 militants were killed and 41 suspects were arrested in a major anti-terrorism operation launched by the Egyptian security forces in North Sinai, military spokesman Mohamed Samir said in a statement Wednesday.

“The forces destroyed three vehicles and 32 motorbikes used by the militants in their terrorist and criminal attacks and also ruined 80 huts and hideouts of the terrorists,” the statement said, noting that the militants started the shooting at the forces that dealt with them.

In the first two days of the operation that started Monday early morning, the security forces killed 56 and arrested over 150 militants during the raids that included North Sinai’s towns of Rafah, Sheikh Zuweid and Arish.

A military officer and a soldier were killed during the operation.

The spokesman added that the forces managed to defuse 18 explosive devices planted by the extremists to target security forces, destroy a storehouse of 300 kg of explosives and nails and ruin five tunnel openings used by the militants to hide their men, vehicles and bikes.

Egypt has been suffering anti-government armed attacks that killed hundreds of police and army men since the army removed former Islamist President Mohamed Morsi in July 2013 in response to mass protests.

On Aug. 20, a car bomb explosion targeting a national security building in Qalioubiya province near the capital Cairo left at least 29 people injured.

The country’s prosecutor general was also assassinated in a car bomb in late June.

Most of the anti-government attacks were claimed by Ansar Bayt al-Maqdis group, which has changed its name to “Sinai State” and declared loyalty to the Islamic State (IS) regional militant group.

Military continuous massive operations in the peninsula have killed hundreds of militants as part of the country’s “war against terrorism.”