You are here: Home / Mediterranean / Egypt: Army kills 16 jihadists in the Sinai 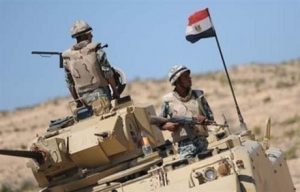 Egypt’s military said that 16 jihadists, an officer and a soldier were killed in the past four days during a major military operation against Islamic State (ISIS) group jihadists in Sinai, AFP reports.

Operation Sinai 2018 was launched on February 9 in the Sinai Peninsula, where Egypt has been fighting an ISIS insurgency for several years.

Most of the attacks in the Sinai Peninsula in recent years have been claimed by the Sinai Province, Egypt’s ISIS affiliate.

Egypt has been under a state of emergency since April last year, after two suicide bombings at churches claimed by ISIS killed at least 45 people in the cities of Tanta and Alexandria.

The sweeping campaign was launched after Egyptian President Abdel Fattah al-Sisi, who is standing in elections for his second term this month, gave them a three-month deadline to crush ISIS in Sinai, according to AFP.

He issued his ultimatum in November after suspected ISIS gunmen massacred more than 300 worshippers in a Sinai mosque associated with Sufi Muslim mystics.

The military says it has evidence ISIS has sought to move members to Sinai following its defeats in Iraq and Syria.