Firefight breaks out during raid on suspected hideout in el-Arish city; weapons seized from group planning attack on security forces, according to Interior Ministry 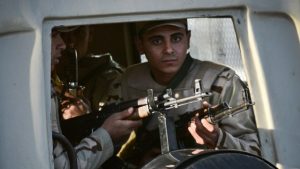 The Interior Ministry said Tuesday the firefight broke out when the forces raided a suspected hideout in el-Arish city. It said the militants were planning attacks targeting security forces, and were in possession of explosives, rifles and ammunition.

Egypt has been battling militants in the northern part of Sinai Peninsula for years, but the insurgency became far more deadly after the 2013 military ouster of Mohammed Morsi, an elected but divisive Islamist president.

An Islamic State affiliate based in the Sinai has carried out a number of high-profile attacks in recent years, mainly targeting security forces and Egypt’s Christian minority.

The bomb struck a military convoy that was patrolling an area just outside the town of Bir al-Abd in northern Sinai.

Bir al-Abd, near el-Arish, was the scene of the deadliest terrorist attack against civilians in Egypt’s modern history, when militants killed 311 worshipers in a mosque on November 24.