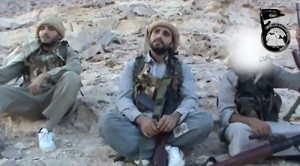 Air and ground forces reportedly participated in the attacks, which targeted militant groups in the area, with five suspected militants killed on motorcycles, five killed by helicopter gunfire, and another man killed at a military checkpoint.

The northern Sinai has been shaken by regular militant attacks despite stringent security measures adopted since a deadly assault in October that killed 30 soldiers.

The militant group Sinai Province has spearheaded an offensive against security forces on the peninsula since the overthrow of Egyptian president Muhammad Morsi by the army in 2013.

The group, formerly known as Ansar Beit al-Maqdis, has pledged allegiance to the Islamic State group, which has captured swathes of territory in Iraq and Syria.

Scores of policemen and soldiers have been killed in the attacks, which militants say are to avenge a crackdown on Morsi supporters that has left hundreds dead and thousands in jail.