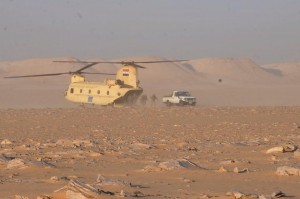 The Egyptian military announced the killing of 10 insurgents, which it says belonged to “an extremely dangerous, armed terrorist cell” near Bahareya Oasis in the Western Desert, according to a press release on their official Facebook page.

The statement claimed that the group was planning to “commit criminal, terrorist activities targeting vital foreign interests” across the country during the Eid El-Adha festival.

Aswat Masriya could not independently verify the content of this statement. Anti-terrorism legislation imposes heavy fines on news organizations that contradict official statements.

Earlier this month in the same area, eight Mexican tourists and their four Egyptian tour guides were killed by security troops who “mistakenly” attacked them, believing they were terrorists.

The general prosecutor issued a publishing ban on an investigation into the incident until its conclusion. The ban includes all media outlets and only allows the publishing of official statements issued by the prosecutor.