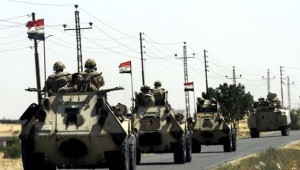 The recent operations is comprehensive and based on fresh information that would aim, according to military officials, at killing “terrorists.” The Egyptian army has launched one of its largest ever military operation in the Sinai peninsula intended to kill “terrorists” since July, military sources said Tuesday. “A comprehensive campaign has been launched based on an estimation of the situation and fresh information about many hideouts and targets.

Such campaigns are undertaken with a clear plan … and with a timeframe,” major general Mohamed Ali Belal was quoted as saying Tuesday by the local Ahram newspaper. The operation, named by the military as “The Martyr’s Right”, comes a few months after militants affiliated to the terrorist group Islamic State group attacked in July the Sinai cities of Sheikh Zuweid and Rafah and killed dozens of Egyptians troops.

Meanwhile, the Egyptian army said in a televised announcement Tuesday that the extensive operation started Monday morning and was aimed at rooting out Islamist insurgents and that by the time of the statement, the operation had resulted in the killing of 29 “terrorists.” North Sinai, which shares borders with Israel and the Palestinian Gaza Strip, is a stronghold of Islamist militant group Sinai Province pledged allegiance to the Islamic State group in 2014.

Sinai Province has intensified its attacks against army and police personnel since the ouster of the democratically-elected President Mohamed Morsi in July 2013. Morsi has been sentenced to death over what right groups call false allegations that lack evidence and in courts that lack transparency and fairness. Morsi’s lawyers say that they are denied the ability to present their cases.