You are here: Home / Mediterranean / Egypt and security strategies: Army and Police are doing a good job 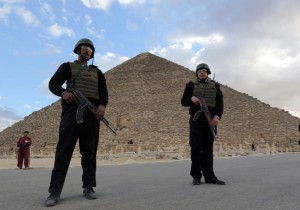 Twice in a week Egyptians began the day with news of bombs targeting security personnel. The first was in the early hours of last Thursday when a massive car bomb was detonated in front of a National Security building in the North Cairo district of Shubra Al-Kheima. Three days later, early on Monday morning, a roadside explosive device was detonated in Al-Beheira governorate as a police bus was passing.  It claimed the lives of three, and injured 27.

Sinai-based Islamic State (IS), previously known as Ansar Beit Al-Maqdis, claimed responsibility for the Shubra Al-Kheima attack, positing a statement saying “soldiers of the caliphate” had carried out the attack “to avenge the execution of our martyrs”.

Following the explosion the Interior Ministry issued a statement saying the perpetrator had been caught on security cameras parking the booby-trapped vehicle and then fleeing the scene on a motorcycle. The prosecutor-general’s office later added that the bomb was hidden inside the bed of a white pickup truck and exploded shortly after its driver parked the vehicle next to the National Security building and then sped off on a motorcycle that had followed the truck.

The Egyptian Organisation for Human Rights condemned the bombing as “an horrific terrorist attack”. It also drew attention to the need for improved information gathering techniques to prevent the reoccurrence of such crimes and called for decisive action from the state to counter attacks that threaten security and public safety.

Terrorist attacks in Egypt have claimed the lives of hundreds of security personnel since July 2013. IS is at the forefront of militant groups launching attacks against security targets since Mohamed Morsi’s ouster.

In its annual report, published on 31 May, the National Council of Human Rights (NCHR) said 2,600 people had died since the ouster of Mohamed Morsi. The casualties include 800 security personnel.

Security experts argue the latest attacks should not be seen as evidence of security failings.

“Security forces are working hard to secure vital installations. The task is made more problematic because it is impractical to prevent pedestrians or cars from passing these places,” says Major-General Talaat Mosallam.

On 11 July a car bomb detonated in front of the Italian Consulate in central Cairo, killing one passerby. Two weeks earlier Prosecutor-General Hisham Barakat was killed when a bomb targeted his convoy in Cairo. In December 2013 the security headquarters in the Nile Delta city of Mansoura, north of Cairo, was partly destroyed by a bomb and in January 2014 Cairo’s security directorate was targetted.

“The operational capacity of IS has been eroded by the army in Sinai,” says security expert Brigadier-General Khaled Okasha. “If anything the group’s last two operations in Cairo, the Italian Consulate and last week’s National Security bombings, which resulted in a low number of casualties, reflect this attrition.”

The Al-Beheira bombing has been claimed by the so-called Black Bloc. The group first appeared in Tahrir Square on 24 January 2013, ahead of the second anniversary of the 25 January Revolution, and appeared to consist of a mix of anarchists and hardcore football fans.

In its statement claiming “full and complete responsibility” for the attack the Black Bloc threatened more operations unless all detainees being held without charge are released.

In May the group claimed responsibility for several attacks in Ismailia and Giza, including the burning of five public transport buses. On Sunday the general-prosecutor ordered the detention of several alleged members of the group.

Okasha argues it is counterproductive to draw too fine a distinction between groups claiming responsibility for violent acts.

“IS plays a game of psychological war, ascribing its actions to other groups in an attempt to give the impression terrorist organisations are proliferating and recruiting more and more young people, which is not true,” he says.

Major-General Fouad Allam, former deputy head of National Security, warns that a security-only approach to countering terrorism is destined to fail. “Instead,” he says, “political, cultural, economic, informational, social, religious and security factors must all come in to play.”

“All concerned ministries and Al-Azhar must be included in the battle. Only then will we be able to counter the false beliefs that turn people towards extremism.”

“We tried to combat terrorism with a security alone approach for 40 years and it did not work. Only when we adopted a more holistic approach following the assassination of Anwar Al-Sadat did extremism gradually begin to disappear.”