You are here: Home / Mediterranean / Egypt accuses Qatar of backing terrorism in Libya 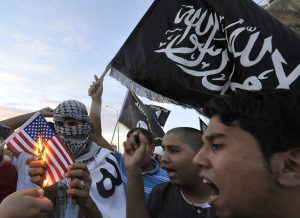 Egypt accused on Tuesday Qatar of supporting terrorist organizations in Libya, like reported by aawsat.com.

During a UN session on “The Challenges of Combating Terrorism in Libya”, an Egyptian delegation presented details on how Qatar and another unnamed country in the region have supported terrorism in the north African country.

Submitting a statement to the Security Council on Qatar, the delegation called for sanctions on Doha, saying that terrorism is the main obstacle to achieving stability in Libya and that its negative effects have extended to its neighbors and the entire region.

Egypt’s UN Ambassador Omar Abu al-Atta said that terrorism is increasing in Libya, since ISIS leader Abu Bakr al-Baghdadi had urged foreign fighters to head there instead of Syria and Iraq.

Egypt’s Assistant Foreign Minister for Arab Affairs Tarek al-Quni stated that Qatar provides support to militants in Libya, which poses a threat to Egyptian national security, particularly along its borders with its neighbor.

“Terrorist groups and organizations in Libya receive support particularly from Qatar and other states in the region,” said Quni while reading Egypt’s statement before the gatherers.

“Libya has become a safe haven for terrorists,” he added, stressing the need for reaching a political settlement in Libya and urging the UN to intensify efforts to ensure the implementation of a political agreement in the country.

Quni recalled the terror acts on Egypt’s Coptic Christians in May, and also mentioned the attempt of 12 vehicles loaded with weapons and explosives to cross the Egyptian border from Libya earlier this week.

He demanded that several measures be implemented in Libya, including: reaching a political reconciliation, intensifying the effort of the UN Support Mission in Libya (UNSMIL) in monitoring and carrying out the political agreement, strengthening cooperation and coordination between the Libyan sanctions committee and ISIS and al-Qaeda sanctions committee and lifting the arms embargo imposed on the Libyan National Army.

Qatari Deputy UN Ambassador Abdul Rahman Yacoub al-Hamadi rejected the Egyptian accusations towards Doha, saying that “the record of the State of Qatar in the fight against terrorism and the commitment to Security Council resolutions and cooperation with the UN is known.”

He also cited reports that denied his country’s involvement in backing terrorist groups in Libya.

He claimed that the experts’ multiple reports do not indicate Doha’s involvement in any violation of the Security Council resolutions or any activities that threaten Libya’s stability.

Hamadi added during the meeting that these charges come in accordance with the aggressive campaign against Qatar.

The Egyptian Foreign Ministry refuted his claims, saying Egypt’s delegation circulated a list of Qatari violations in Libya, according to reports from UN expert teams, stressing that Qatar is the main financier of terrorism in Libya.

The Libyan delegation stressed in its statement that instability in Libya provides a suitable environment for terrorist groups and that the international community must undertake a number of measures, including providing weapons, that enable authorities to combat terrorism.

The delegation also requested the following measures to be taken by the international community: provide Libya with equipment to monitor borders and control the flow of foreign fighters, implement Security Council resolution 2178, increase the coordination between Libya and other countries to track the arms and prepare reports that provide detailed information about each weapon entering Libya.

Egyptian Foreign Minister Sameh Shoukry meanwhile said on Wednesday that Doha has no other option but to clearly respond to Arab demands. It has to choose between preserving the Arab national security or undermining it in favor of foreign powers.

Speaking to Middle East News Agency, Shoukry said: “Egypt’s demands are known and clear and whoever continues to conspire against it and its people will be the first to suffer.”