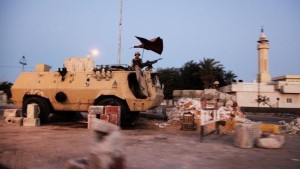 A group of terrorists attacked a security checkpoint at Al-Naqb in southwestern Egypt’s New Valley Governorate, 70 km from Kharga city, killing eight police officials and injuring three others, like reported by outlookindia.com.

The attack took place on Monday night in which two of the attackers were killed during the gunbattle between security forces and the terrorists, the Interior Ministry said in a statement.

The forces have launched a hunt for the remaining attackers who managed to escape after the attack, it said.

No terror group has claimed responsibility of the attack so far.

Egypt has witnessed many violent attacks by militants in the last few years and since the January 2011 revolution that toppled the ex-president Hosni Mubarak.