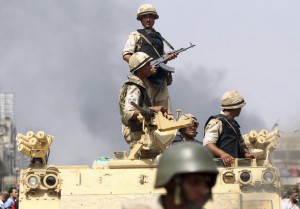 Militancy inside Egypt has seen a significant rise since July 2013, with the military ouster of Islamist President Mohamed Mursi, following mass protests against his rule. Most attacks occur in North Sinai and target security forces.

Last week, the armed forces announced that security operations have left a total of 725 suspected militants killed between late October and late April.

Gunmen opened fire on a vehicle in Arish  on Saturday, leaving three prosecutors and a driver dead.

Police sources said the attack was carried out by militants belonging to Ansar Bayt al-Maqdis.

The sources believe the attack came in response to a court decision earlier on the same day to refer Mursi to the Grand Mufti, a step that must be taken in Egypt’s court system ahead of issuing a death sentence.

In an audio recording released online late Wednesday, Ansar called for attacks on judges. The authenticity of the audio recording could not be verified by Aswat Masriya.

Egypt carried out on Sunday executions against six defendants found guilty by a military court of participating in an attack against security forces in March 2014. The defendants are believed to be members of Ansar.

In the audio recording, cleric Abu Osama al-Masry vowed to avenge for his “brothers’ death”.

“By God, we will avenge our brothers’ death … from those who issued the ruling and those who carried out the verdict and from all those who support the tyrants.”

The Sinai-based Ansar is Egypt’s most notorious militant group; it claimed responsibility for the majority of militant attacks carried out in the Sinai Peninsula since July 2013.

The group changed its name to Sinai Province after pledging allegiance to the leader of the Islamic State fighters in Iraq and Syria, last November.