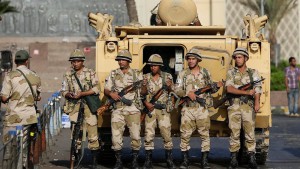 Published on the army spokesman’s official Facebook page, the report documents the killings of 725 terrorists between October 25, 2014 and April 30, 2015.

The highest number of terrorists killed in one month was 173 in February. In January, a month before that, the lowest number of killings was recorded, with 44.

In addition to the hundreds of terrorists killed by Egyptian security forces, some 1,873 suspects were also arrested on related charges. Furthermore, 206 other wanted individuals were taken into custody.

Most terror attacks targeting police and army personnel are performed with unlicensed cars and motorcycles. As such, the report documented the confiscation and destruction of 591 vehicles with no license plates, as well as 1,447 motorcycles.

In addition, some 1,823 terrorist hideouts were destroyed with over 80,000 types of bullets confiscated.

Egypt has been engaged in a decade-long battle with terror groups in North Sinai. Terrorists are believed to have killed hundreds of security officers in the past year and a half with authorities trying to hit back just as strongly.