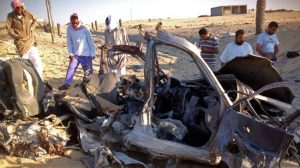 Seven Egyptian civilians were killed when a terrorist vehicle loaded with explosives went off near a military checkpoint in the country’s North Sinai province, military spokesman said.

The military spokesman said in a press statement that the terrorists planned to explode the car at a crowded checkpoint in Arish city, but a military tank ran over the vehicle 200 meters before reaching the checkpoint.

Two children and two women were among the victims, the spokesman said, adding that the attack would have caused the death of at least 50 military personnel and civilians if the terrorists managed to reach the checkpoint.