You are here: Home / Mediterranean / Egypt: 5 terrorists killed and 16 arrested in northern Sinai 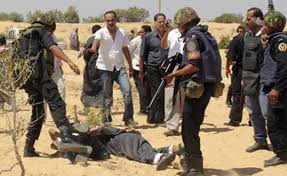 Egyptian Armed Forces have announced that they have killed five terrorists, including one of the leaders of Ansar Bait al-Maqdis, an extremist militant group based in the Sinai peninsula.

The forces also said they have arrested16 suspects, destroyed a vehicle belonging to terrorists in northern Sinai, seized quantities of ammunition, and disabled two explosive devices targeting them.

Colonel Tamer al-Rifai, Egyptian Army Spokesman, said that these efforts are part of their continuing tasks to uproot terrorism and eliminate Takfiri elements.