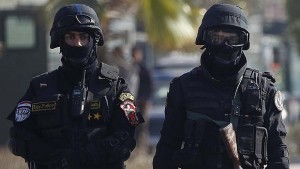 High-level security sources revealed that 39 suspects have been arrested and 10 terrorist cells destroyed in a crackdown across different areas in North Sinai, according to egyptindependent.com.

The arrested suspects are currently being interrogated to verify if they are linked to any terrorist attacks. The destroyed factions were used by militants to either hide or launch their attacks against the security forces. In Arish city, 120 houses were raided as part of the crackdown, according to the sources.