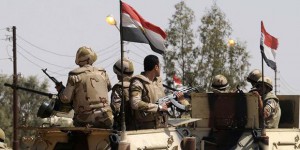 North Sinai security forces killed 32 militants and arrested six suspects in the context of the “Martyr’s Right” military operation in the towns of Arish, Rafah and Sheikh Zuweid, said the army spokesman Tuesday.

The military’s account of the operation indicates that hundreds of “terrorists”, as well as a few security personnel, have been killed.

The operation is described by the military as one of the “largest” operations in the Sinai peninsula against insurgency.

According to previous statements by the armed forces, a total of 87 militants were killed from Saturday through Monday.

North Sinai militants have stepped up attacks targeting security forces since the military ousted Mohamed Mursi as president in July 2013 after mass protests against his rule.

Since October 2014, Sinai has been under a state of emergency, which was subjected to repeated renewals, following a terrorist attack that resulted in the death of 33 soldiers. The attack was then claimed by ISIS-affiliated “Sinai Province”.