You are here: Home / Mediterranean / Egypt: 3 soldiers killed in campaign against Islamic militants 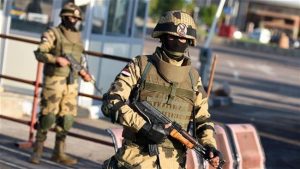 Three Egyptian soldiers have been killed in a 10-day-old campaign against Islamist militants focused on the Sinai peninsula, Egypt’s military said on Monday, according to reuters.com.

It was the first time the military has reported its own casualties since it launched the operation on Feb. 9. The statement did not say where or when the soldiers had died.

The military says it has killed dozens of militants and arrested hundreds of suspected fighters and criminals in the operation, which is taking place ahead of a three-month deadline that President Abdel Fattah al-Sisi set to clear North Sinai of jihadists. [nL8N1Q57JU]

A group of Sinai-based jihadists swore allegiance to Islamic State in 2014. Attacks by the militants have killed hundreds of soldiers and police and scores of civilians.

Sisi is seeking re-election in March when he will run virtually unopposed.