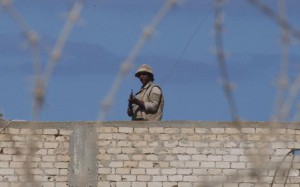 The suspected militants are believed to have been members of the Sinai-based militant group Ansar Bayt al-Maqdis, which has claimed more responsibility for militant attacks across the country than any other group, the sources said.

They added that five people were arrested after the clashes.

Militancy inside Egypt has seen a significant rise since July 2013, with most attacks targeting security forces in North Sinai.

The armed forces responds to the militancy with an intensified crackdown in the Sinai Peninsula.

Armed forces spokesman Mohamed Samir said last week that a total of 141 suspected militants have been killed in North Sinai in the month of May.