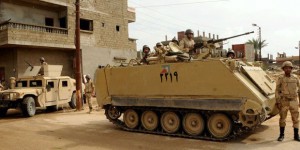 A total of 438 suspected militants have been killed as of Thursday night, Samir announced in a Thursday statement.

Egypt has witnessed a significant rise in militancy since the military-backed ouster of Islamist President Mohamed Morsi in July 2013 following mass protests against his rule. According to the Interior Ministry, militant attacks have killed more than 500 security personnel since then.