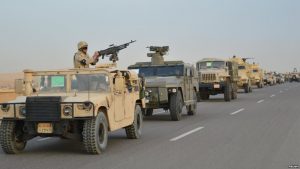 Three Egyptian army officers and 11 militants were killed in the recently launched “Sinai 2018” major anti-terror campaign, the military spokesman announced on Tuesday, like reported by xinhuanet.com.

“Three army officers were killed and other four soldiers were wounded in exchange of fire, in the past four days” said military spokesman Tamer al-Refaay in a statement.

“The air forces destroyed 20 targets used by the terrorist elements as a base for launching attacks, as well as two explosive-laden vehicles,” he added.

The forces also raided 185 targets used for sheltering terrorists and for hiding their weapons, it added.

Also, 641 militants have been arrested, raising the number of detained to 2,235 since the beginning of the operation, the army spokesperson added.

Since the launch of “Sinai 2018” operation on Feb. 9, ten army men were killed 13 were wounded, while the death toll of the terrorists reached 82.

President Abdel Fattah al-Sisi ordered the armed forces in November to uproot terrorists within three months after an attack on a mosque killed more than 300 people in Sinai city of Arish.

Bordering Israel and the Palestinian Gaza Strip, Egypt’s North Sinai province has been the center of terrorist attacks that killed hundreds of policemen and soldiers following the military ouster of former Islamist President Mohamed Morsi in July 2013 in response to mass protests.

Attacks later expanded to reach several other provinces including Cairo and started to target the Coptic minority via church bombings and shootings.