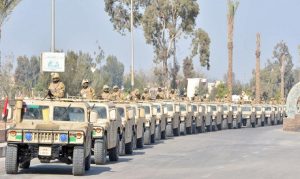 Twelve militants have been killed in northern and central Sinai on the fourth day of a comprehensive anti-terrorism operation waged by military and security forces, Egypt’s army spokesperson Tamer El-Refaie said in a statement on Monday, like reported by ahram.org.eg.

This was the fifth communiqué and the second release of casualty figures since Operation Sinai 2018 was launched on Friday.

El-Refaie said 92 other susp-ects were captured and 60 targets used by militants were destroyed in Monday’s operations.

“The army destroyed and seized 20 4×4 vehicles, 27 motorbikes, 30 hideouts and ammunition storehouses. Army sappers also detonated 27 IED’s that were planted in the area of operations,” the statement said.

“Upon intelligence, the air force targeted and destroyed 60 targets used by terrorist elements,” it added.

Operation Sinai 2018 was launched on Friday morning, involving land, naval and air forces, as well as the police and border guards, targeting “terrorist and criminal elements and organizations” in northern and central Sinai, as well as parts of the Nile Delta and the Western Desert.

On Sunday, the army spokesperson said that army units killed 16 militants and arrested four others.

El-Rafei said Operation Sinai 2018 was launched “to implement the plan of comprehensive confrontation with terrorist and criminal elements and organizations in North and Central Sinai, and in other areas in the Nile Delta and desert areas west of the Nile Valley.”

Egypt has for years been battling an Islamist militancy based in the northern part of the Sinai Peninsula that mainly targets security forces. The army said it has killed hundreds of militants in military operations there.

In late November, Egyptian President Abdel-Fattah El-Sis ordered the military to defeat terrorists in North Sinai within three months, a deadline that will expire at the end of February. He authorized chief of staff Mohamed Farid to use “brute force.”.