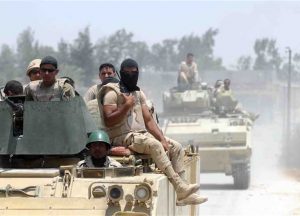 Ten militants and an Egyptian army officer were killed over the weekend in North Sinai, according to a statement issued on Sunday evening by Spokesperson for the Egyptian Armed Forces Colonel Tamer al-Rifaei.

Egypt managed to thwart a terrorist attack on a security base in North Sinai on Sunday, the statement clarified, which resulted in the deaths of 10 militants.

An officer with the Egyptian Armed Forces was also killed during the attack and another officer injured in the exchange of fire, the statement said, adding that the armed forces managed to destroy a four-wheel drive vehicle used by the militants.

Egypt’s armed forces are continuing to sweep the surrounding area in pursuit of other terrorist elements, the statement said, stressing that the military and police would efforts to eliminate violent extremism.

For years Egypt has battled an extremist insurgency in North Sinai, which is led by a local affiliate of the Islamic State (IS) terrorist group. Extremists have targeted military personnel at security checkpoints in the area as well as civilians. In November 2017, dozens of gunmen attacked a mosque in North Sinai’s Al-Rawda village during Friday prayers, killing over 300 people.

Earlier in February, suspected Islamic militants blew up a natural gas pipeline in North Sinai. Militants have regularly targeted gas pipelines between Egypt, Jordan, and Israel since Egypt’s 2011 uprising, according to a report from The Associated Press.