You are here: Home / Mediterranean / Efforts at Libya confrontation with Islamic State stymied 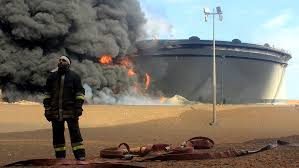 When US Secretary of State John Kerry met with Russian Foreign Minister Sergei Lavrov last week in Moscow, top priority was given to Syria and Ukraine. But another nagging crisis was also on their plate: Libya.

With plans advancing for an assault against the Islamic State’s capital in Raqqa, Syria, an estimated 5,000 ISIL fighters, and some top ISIL leaders, have moved into the Sirte region of Libya, controlling a coastal area of 150 miles, and triggering a refugee flight that has European governments bracing for an even bigger refugee influx of a million Africans this year.

A coalition of NATO countries, including the United States, Italy, France and Britain have been working up and revising plans for a military campaign against the Islamic State in their new African beachhead. British SAS commandos are on the ground in Libya, along with US Special Forces. So far, the Pentagon is planning what is described as a limited military campaign, involving bombing sorties, from bases in Italy, and drone attacks on ISIL leaders, modeled on the “decapitation” program that has knocked out some top ISIL commanders in Iraq and Syria.

Even the limited military actions are, for the time being, on hold.  The stumbling block is the lack of a unity government in Libya. In fact, there are four distinct “governments” controlling parts of the country. An internationally recognized parliament, based on June 2014 elections, is seated in internal exile in Tobruk. A coalition of Islamist militias, broadly grouped under the Libya Dawn umbrella, controls the capital city of Tripoli. The Islamic State is controlling the Sirte region, which contains some crucial oil port and refinery facilities. And in December, United Nations special envoy Martin Kobler formed a Government of National Accord.  That GNA has been rejected by both Tobruk and Tripoli.

Last week, Kobler announced that the Government of National Accord would be moving into Tripoli to begin governing. Immediately, in response, the “prime minister” of the Islamist coalition controlling the capital declared a state of “maximum national emergency,” threatening to mobilize all militias to fight against the GNA intrusion. The Foreign Minister of Malta, George Vella, warned that Libya is nearing a “point of no return,” and urged the United Nations to drop the planned insertion of the Government of National Accord, because the effort would intensify the national discord and revive the worst of the fighting.

The Libya Dawn coalition of militias next issued demands that any unity government must accept Sharia law, and, more important, must remove General Khalifa Haftar from power. Gen. Haftar is the Defense Minister of the internationally recognized Tobruk government, and has led Operation Dignity, targeting the Islamist factions.

While all of these cross-purpose efforts continue, with no clear solution in sight, the Islamic State is taking full advantage of the rifts. ISIL forces are presently moving to take over Ras Lanuf, the site of key oil depots.

An estimated 90 percent of the population of ISIL-controlled areas of the country have fled. UN envoy Martin Kobler has declared a humanitarian emergency, with both food and medicine in short supply. The Libyan economy is in crisis, with oil production down to 350,000 barrels a day, from a pre-2011 peak of 1.6 million barrels.

The African Union has warned that the planned NATO intervention can result in a spreading of the ISIL operations south into other parts of Africa, where groups like Boko Haram and Al Shabab have already announced their affiliation. Al Qaeda in the Islamic Magreb (AQIM) has been deeply entrenched in north Africa for a long time, and poses further terrorist threats to the continent.

While Kerry and Lavrov agreed, in principle, that the ISIL threat to Africa had to be countered, they were not able to come up with any concrete plans, as time works in favor of the Islamic State, and Tripoli and Tobruk-centered rivals are more focused on fighting each other than in forming a unified effort against ISIL.