You are here: Home / Senza categoria / Economics Of Terror

Underneath its much-publicised propaganda of the destruction of Assyrian and Babylonian sites, ISIS manages a remarkably well-organised trade in the artefacts. 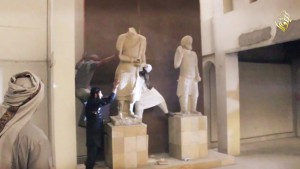 On August 18, 2015, Khaled Mohamad al-Asaad, a Syrian archaeologist, was publically beheaded by the Islamic State of Iraq and Syria (ISIS). The cruel fate of Assad was not brought upon by conflicting with the religious ideology of ISIS, but because he refused to reveal information about thousands of invaluable artefacts hidden in the ancient city of Palmyra.

Underneath its much-publicised propaganda of the destruction of Assyrian and Babylonian sites, ISIS manages a remarkably well-organised trade in the artefacts plundered from these ancient cities. Everything from frescoes, busts, to entire statues smuggled from Palmyra, a UNESCO world heritage site, is flooding the antiquities black markets in Europe.

A Lebanese-French archaeologist, Joanne Farchakh, claims that antiquities from Palmyra are already available for sale in London. According to the records maintained by Abu Sayyaf, a key ISIS member killed in a United States air raid last year, this systemic trade in Syrian antiquities generates hundreds of millions of dollars for ISIS.

The trade in Syrian antiquities is just the tip of the iceberg in the robust economic infrastructure of the richest terror group the world has ever seen. ISIS controls vast swaths of Iraqi and Syrian territories, an area roughly the size of England, and it is increasingly behaving like a sovereign state for generating its large revenue.

ISIS collects taxes on income, business revenues, and even toll taxes on the highways under its control. For example, in Mosul, Iraq, ISIS converted a police station into a regional fruits and vegetable market, from which it collects an annual rent of 2.8 million Iraqi dinars. In Raqqa, Syria, ISIS collects a cleaning tax from the city markets ranging from 2500 to 5000 Syrian pounds. It also collects water and electricity bills from the local Syrian residents.

More malicious means of generating revenue include kidnapping ransoms and frequent financial fines imposed on the local citizens. In late August last year, Mohammad Hamid, a 29-year-old Iraqi shopkeeper, was fined 50,000 Iraqi dinars for smoking a cigar in his shop. It also collects registration fees for automobiles, charges students for textbooks, and operates multiple businesses like water bottling plants, textile factories, and even mobile phone companies. But all of these are dwarfed in comparison to the revenues generated by the oil wells and refineries located within the ISIS-controlled territories.

The United Nations estimates that ISIS produces close to 50,000 barrels of oil per day, generating around $1.6 million per day from the oil sold on black markets. In the 1990’s, the Saddam Hussain regime established smuggling routes to circumvent the economic sanctions imposed by the United Nations. These smuggling routes are now routinely exploited by the ISIS for its illegal oil trade. Interestingly, the cheap oil smuggled by the ISIS is a much-prized commodity in Turkey and Kurdish territories, the very regions that are engaged in active conflict with ISIS.

The most recent estimates suggest that the ISIS has acquired a staggering corpus of $2 billion dollars. Due to its financial prowess, ISIS faces virtually no obstacles in procuring advanced weaponry from black markets and corrupt military officials. It pays $400 per month to its fighters, which is more than what is offered by the Syrian rebel groups and the Iraqi government.

Even more frighteningly, it costs surprisingly little to orchestrate highly destructive terrorist attacks. In 2006, two men boarded passenger trains in the German city of Cologne, with bombs hidden in their suitcases. Although the attack was narrowly averted, the bombs were capable of blowing up the trains and cause massive loss of life and public anxiety. The cost of one of these suitcase bombs was just $500.

The total cost of the July 2005 attack on the London transportation system was estimated to be around $14,000 dollars. The London bombings resulted in 52 casualties and injuries to over 700 civilians.

With a war-chest of $2 billion, there is practically no limit to the number of terror attacks that can be launched by ISIS. Nonetheless, despite accumulating an unprecedented amount of wealth for a terrorist organization, ISIS is still far away from realising the idea of a viable state that is self-sufficient, capable of paying salaries to civil and military personnel, building and maintaining roads, highways, educational institutions, hospitals, water and electricity networks.

Terror financing is not a new problem, nor is ISIS the first significant organised terrorist organisation. In the year 2000, Taliban and Al-Qaeda terrorists received ten million Saudi riyals ($2.7 million), under the guise of an Islamic charity for building mosques schools and football fields. However, unlike the more traditional terror outfits like Al-Qaeda, ISIS derives most of their revenues internally, and therefore, it is difficult to cut off their financing sources.

ISIS is not susceptible to banking and financial sanctions since it does not rely on the formal financial system. The antiquities black-markets are becoming an increasingly significant source of financing for ISIS. Irina Bokova, the Director-General of UNESCO estimates that the value of antiquities looted out Syrian and Iraqi areas is more than $7 billion.

The international community must aggressively crackdown on the antiquities black-markets to prevent the sales of stolen Syrian artefacts. The World Economic Forum at Davos must be used for launching an international initiative of preventing sales of stolen antiquities by bringing together experts from museums, archaeologists, dealers of antiquities, collectors of ancient artefacts, cultural heritage lawyers, logistic companies, and other related parties.

The primary focus of US-led military coalition should be on destroying the oil infrastructure by surgical strikes on oil production facilities, refineries, oil pump stations, and logistics largely based on thousands of trucks used for oil smuggling. Large installations like oil refineries are unmistakable targets for air strikes. In just a period of two months (from September to October 2014) of intensified airstrikes, ISIS lost 20 of its oil refineries. Curtailing its refining capacity would be a major setback to ISIS as there are far fewer customers of crude oil than for commercial fuels like petrol and diesel.

Crude oil is also difficult to sell to individuals and businesses across borders, and ISIS would face a considerably trickier proposition of selling to large private and state-owned oil refineries across its borders. Moreover, crude oil is significantly cheaper than refined petroleum products, creating a major dent in the profitability of ISIS’s oil business. If ISIS is selling oil, someone is buying it.

Ali Edibogluan, a member of Turkish Parliament claimed that ISIS had smuggled oil worth $800 million into Turkey in the year 2013-14. The oil is smuggled to the Turkish border regions of Gaziantep, Kilis, and Urfa using basic pipelines laid out by ISIS.

Compelling evidence of Turkey’s involvement in illegal oil trade with ISIS was uncovered by a recent study by Dr. Alec D. Coutroubis and Dr. George Kiourktsoglou of the University of Greenwich, London. They found that whenever ISIS is fighting in the vicinity of an area hosting oil assets, the export output of the Turkish state-owned refinery spikes.

The fall in the global oil prices, trading at around $40 dollars per barrel in December 2015, has created a major problem for ISIS. Nonetheless, most of the smuggled oil trades at around $21-22 per barrel in the Turkish regions, still providing a strong economic incentive for continuing the illegal oil trade.

Currently, the United States is struggling to persuade Turkey, a NATO ally, to crack down on ISIS oil trade network. The illegal oil trade is a very lucrative proposition for Turks and Turkish government officials, and it makes economic sense to turn a blind eye towards it. Nonetheless, it is crucial to disrupt the oil flowing from ISIS-controlled territories to its major customers in Turkey, Iraq, and Kurdish regions.

This can be done by diplomatic pressure, the threat of economic sanctions, or even by artificially depressing the oil price in the region by temporarily increasing the oil supply, providing direct oil subsidies, and significantly reducing the tax burden on oil consumption. The tax implemented on refined oil in Turkey stands at 66 per cent, higher than almost all other European countries. Eliminating the taxes altogether would reduce oil prices by two-thirds, practically eliminating the incentive to smuggle oil to Turkish regions.

According to the United Nations, ISIS extorted around $35-$45 million in ransom payments in the year 2014. Additionally, they should implement severe counter-terrorism sanctions against any businesses engaging in trade with terrorist groups, such as cancelling registration and licenses, debilitating financial penalties and criminal prosecution. Specifically, in the antiquities and energy businesses, the private firms should have a legal obligation to conduct due diligence to ensure that their business partners have no direct or indirect affiliation with the terrorist groups.

Restricting the illegal trade in oil and stolen antiquities would enhance the importance of procuring funding from external donors. Several wealthy countries in the Middle East, most notably Qatar and Kuwait, remain lax in enforcing counter-terrorism laws against financing terrorists. It is crucial to keep the sustained diplomatic pressure on such nations to curb ISIS’s financing from wealthy sympathizers and patrons in these regions.

The successful enforcement of these steps would limit the external sources of financing for ISIS; however, it would continue to extort money from the citizens residing within its territories. Immune to any external influences, it is also potentially one of the most sustainable sources of income for ISIS.

From the city of Mosul alone, ISIS generates around $12 million per month. Iraq imports most of its agricultural products from Jordan and Syria. At the town of Ratba, Iraq, the ISIS’s “customs officers” collect taxes from the truckers going from Jordan to Iraq and even issue invoices.

The only way to disrupt these sources of income is to reclaim these territories from ISIS. Therefore, continued military intervention, would be essential to complement the economic strategy against ISIS. While a number military initiatives under a US-led coalition and Russia are already underway, their limited impact suggests that they need to be intensified.

The current military campaign should revolve around surgical strikes on economic and strategic targets that maximize the damage caused to ISIS while minimizing the civilian casualties. In the long run, it would involve an intervention by well-trained and adequately resourced ground forces to liberate these territories from the stranglehold of the ISIS militia.