Haftar’s spokesperson, Ahmed Al-Mismari claims that forces supporting the Libyan Government of National Accord(GNA) and its defense minister Mihdi Al-Barghathi are gathering near Al-Jufra in the south to attack the Oil Crescent export ports 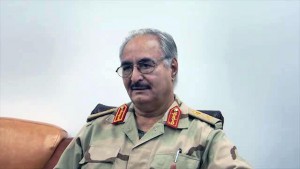 The four main export ports in the Oil Crescent were recently seized by Field Marshal Khalifa Haftar, commander of the Libyan National Army (LNA) associated with the House of Representatives (HoR) based in the east of Libya in the city of Tobruk. The HoR does not support the GNA nor does Haftar. Mismari said that along with the GNA forces were the forces of Ibrahim Jodhran. Jodhran was head of the Petroleum Forces Guards from whom Haftar seized the oil ports. Mismari also claimed that an Al-Qaeda-linked extremist group was involved which he did not specify.

Mismari told an Egyptian newspaper: “All those forces are positioned there and they are trying to advance toward the oil terminals after they have formed an operations room headed by Al-Barghathi – dubbed as Operations Room for Liberation of Oil Terminals. Fight between our forces and those of the UN-proposed government is drawing nigh.”

Mesmari also claimed that the LNA and Haftar’s Dignity Operation control most western cities and that all Tripoli residents support their operation. This is stretching the truth to put it mildly. Militia opposed to Haftar and loyal to the GNA or at least opposed to Haftar control much of the west and have considerable support in Tripoli and Misrata.

Mesmari said that several scenarios were possible. He said that LNA forces had taken all necessary measures to stop any advance on the ports. There have been several reports from eastern sources that the defense minister of the GNA Al-Barghathi has gathered some brigades together to regain control of the oil ports from Haftar’s LNA forces. Claims have been made by Barghathi that the LNA forces guarding the ports are actually mercenaries.

Barghathi, formerly a Haftar ally supporting Operation Dignity, is now a strong opponent since he became designated defense minister for the GNA. He formerly headed the 204 Tanks Brigade. Haftar forces recently kidnapped and killed a number of Brigade members still loyal to Barghathi. Forces loyal to Haftar have also abducted a number of men from Ran Lanuf and the town of Ben Jawad whom they claim were plotting to seize the oil terminals.

It remains to be seen if there is any truth to the report by Mesmari. The UN has urged the GNA not to resort to violence to regain the ports. Neither the GNA nor Barghathi have said publicly that they are planning to do so. Haftar has been cooperating with the National Oil Company(NOC) based in Tripoli and associated with the GNA. He has allowed the export of oil from the ports and the NOC to operate them. However, control of the ports gives Haftar considerable leverage in negotiating with the NOC.