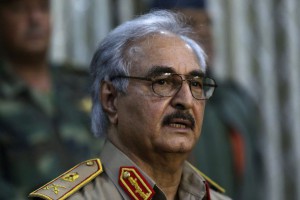 “The meeting really did take place. Badri came to Moscow for one day. During talks with Bogdanov, they discussed the issue of lifting the embargo on arms supplies. Libyans are asking us to send them small arms, but also equipment, including planes. Also, they asked Moscow to start an anti-Islamist military operation in Libya that is similar to the one in Syria,” the source told the newspaper. Haftar visited Russia in late June, discussing a number of issues, including weapons deliveries, with Shoigu and Russia’s Security Council Secretary Nikolai Patrushev.

Russia joined the UN Security Council arms embargo on Libya in 2011, when the country was gripped by an uprising against longtime leaderMuammar Gaddafi, who was overthrown the same year after several months of civil war. The country was later contested by two rival governments, the internationally-recognized Council of Deputies and the Tripoli-based General National Congress.

On March 31, the long-anticipated UN-backed Government of National Accord in Libya started to perform its duties. The government has so far failed to unite the country. Daesh, which is a militant jihadist organization outlawed in many countries, including Russia, also maintains significant presence in the country, especially in and round Gaddafi’s hometown of Sirte.