You are here: Home / Europe / Dutch to decide on Syrian bombings soon 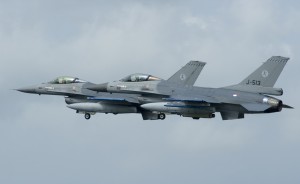 Defence minister Jeanine Hennis told television programme Buitenhof on Sunday she expects decision about Dutch participation in bombing raids in Syria will be taken in the near future.
Dutch F16s are currently involved in bombing IS targets in Iraq and the Netherlands has always said there needs to be an international mandate to attack Syria. However, a narrow majority of MPs are now thought to be in favour of direct bombing in Syria.
A senior government advisor said this summer there are no legal objections to expanding the anti-IS mission to cover Syria, as the US, Canada and some Arab nations have done. Senior Dutch military officials have also called for a change of position.
Prime minister Mark Rutte said at the time there needs to be a proper mandate for action but that did not mean the Netherlands would not get involved. ‘The question of what role the Netherlands shold have will require a separate decision,’ he said.