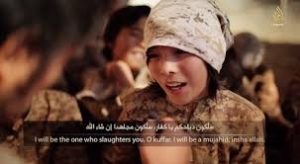 The Dutch counter-terrorism coordinator is concerned about the 80 Dutch children living in IS-controlled territory in Iraq and Syria.

Dick Schoof told the Telegraaf on Wednesday that the children, around half of whom were born abroad, risk becoming extremely traumatised and could pose a real threat to the Netherlands, like reported by dutchnews.nl.

Schoof made the comments ahead of the publication of a new report by the AIVD security service which says officials are keeping tabs on children as young as nine.

This is the age that children are being trained in the use of weapons and making explosives and can be used to carry out attacks in Iraq and Syria, the AIVD said.

The organisation expects more Dutch jihadis to return to the Netherlands now the situation in the Middle East has worsened for them.

Monitoring Police, justice officials and local councils should be alert to the dangers, AIVD chief Rob Bertholee told the Telegraaf.

‘It is crucial that a careful risk analysis is made of every person,’ he said. ‘It is unnecessary, and for us impossible, to monitor everyone day and night.’

The AIVD report said eight officials are monitoring Dutch jihadis full time. Returnees Some 280 Dutch nationals are known to have gone to Iraq and Syria and 50 have returned.

Most of them came back prior to 2015. In addition, 45 Dutch jihadis have been killed. Officials from 20 countries are meeting in The Hague on Wednesday to discuss the risks posed by jihadis returning home.