You are here: Home / Europe / Dutch ground troops could be sent to Syria 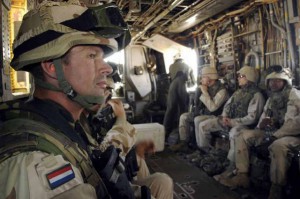 The refugee problem will not be solved without a solution in Syria and that could mean Dutch soldiers being deployed, CDA party leader Sybrand Buma said on Tuesday in an interview with news website Nu.nl.
‘We must look at the source of this stream of refugees: the chaos in Syria and Iraq, and also the instability in Libya,’ Buma said. He wants safe havens set up in crisis areas where soldiers under the United Nations or European Union flag would provide peace and safety for the refugees.
This would mean the Netherlands enlarging its mission in the fight against the so-called islamic state and ‘if that involves sending in soldiers on the ground, we must be prepared to do so’, Buma said.
The Christian Democrat leader also wants a change in the UN refugee treaty. Instead of processing refugees as asylum seekers, he wants them designated as displaced persons. ‘This would make it clear from day one that their stay is temporary,’ he told Nu.nl.