You are here: Home / Senza categoria / Dunford: Russia an existential threat and Isis a trans-regional risk 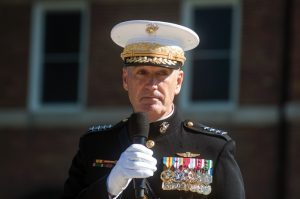 The chairman of the Joint Chiefs of Staff was addressing a gathering at the Brookings Institute where he termed Russia as an existential threat and Isis as a trans-regional threat that goes beyond Syria and Iraq, a Pentagon press release stated.

“If you look at the capabilities presented by those four-plus-one threats … it gives you the full spectrum of the challenges we may face,” Dunford said, sharing the ideas and strategies that the new US administration under President Donald Trump might work on to deal with the threats.

Explaining his comment on Russia being an existential threat, Dunford said Kremlin is modernising its nuclear enterprise; cyber capabilities; land, sea and air forces and space capabilities. He also accused the country of using information, cyber, diplomacy and military capabilities short of war to accomplish their strategic goals.

“What they seek to do in all of that is to undermine the credibility of our ability to meet our alliance commitments to Nato [North Atlantic Treaty Organization] and then [operating against] the cohesion of the Nato alliance would be an objective of Russian activity,” he reportedly said.

Reiterating US’ commitment to the alliance, he said that it needs to continue to transform “to be relevant for the threats of today and tomorrow”.

On fighting extremist violence, Dunford said that the threat that needed to be addressed was not contained within Syria and Iraq, but was trans-regional. He talked about a 30-day review report, which is being developed seeking inputs from intelligence services and the State, Defence and Treasury Departments on plans to counter these threats. He said the plan will be a political-military plan.

“Anything we do on the ground has to be in the context of political objectives or it is not going to be successful,” the chairman explained.

“We are in the business of providing integrated options to the president to deal with the challenge he has articulated. It will be a whole-of-government approach.