You are here: Home / West Asia / Drug lord famous as ‘Wolf’ arrested in West of Afghanistan 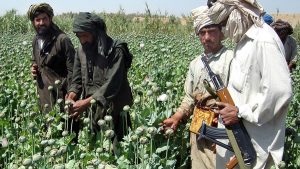 A top drug smuggler who was famous as ‘Wolf’ has been arrested in western Nimroz province of Afghanistan, like reported by khaama.com.

According to the local security officials, the drug smuggler, Naeem famous Wolf, was arrested during a special military operation conducted by the police forces of the counter-narcotics department.

He said the Afghan security forces also confiscated 38 kg of crystal methamphetamine which was professionally placed in a vehicle for the smuggling.

According to Omari, the Afghan security forces have continuously conducted operations to arrest Naeem since eight years.

He said Naeem was one of the major drug smugglers in western Nimroz province.

The latest attempts by the Afghan security forces to counter drug smuggling and production came as the UN Office on Drugs and Crime (UNODC) said late last year that the drug production has increased by almost 43 per cent in the country.

According to UNODC, the area used to farm the poppy plant, the source of opium, increased by 10% to 201,000 hectares.