You are here: Home / Senza categoria / Drones logical next step for terrorists 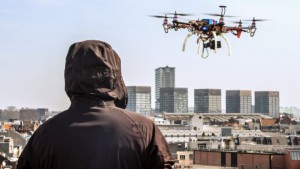 “The truth is it’s just a matter of time before someone figures this out,” former Boston police Commissioner Edward F. Davis told the Herald. “The bottom line with these things are as the drones get more sophisticated and more powerful, it’s all about payload.

“The danger is real, and there are companies that are working on anti-drone strategies, but they aren’t fully baked yet,” said Davis, who noted Boston police were involved in the 2011 case of an Ashland jihadi-wannabe who planned to bomb the Pentagon and U.S. Capitol with remote-controlled planes.

RAND Corp. terror analyst Colin Clarke said weaponized drones, which have also been used by the Iran-backed terrorist group Hezbollah, are the “tip of the iceberg” for where terror groups can go with the latest technology.

“Why should a pizza be delivered by a drone, but not a bomb?” Clarke said.

“These guys have the time and they have the patience and they, frankly, have the know-how to put together some pretty lethal improvised weaponry,” Clarke said. “If anything, I’m surprised it took them so long to do it.”

Military officials yesterday confirmed that an ISIS bomb-laden drone in northern Iraq blew up earlier this month after Kurdish fighters had shot it out of the sky and were taking it back to camp for inspection.

U.S. military spokesman Col. John Dorrian said ISIS surveillance drones are nothing new — many have been shot down by American forces and none has injured or killed a U.S. soldier.

Dorrian said the drone IED attack is far from an “existential threat” to U.S. forces or anything with “strategic impact,” and he stressed the military is moving more anti-drone equipment into the area.

“There’s a growing threat that the terrorists are going to be lethal from the sky and this is a natural evolution of where we are headed technologically in the world,” Abrahms said. “I can imagine, especially in cases where we try to harden soft targets like stadiums, where people instead of going through an X-ray machine can just fly in there.”