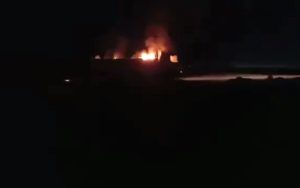 An unidentified drone carried out strikes on Iranian-backed militias near the Syrian-Iraqi border in the early hours of Wednesday morning, according to an opposition-linked war monitor, according to toi.com.

The London-based Syrian Observatory for Human Rights said the strike targeted weapons caches belonging to pro-Iranian militias in the Bukamal region of eastern Syria, an area that has reportedly been targeted by Israel in the past.

Yet, according to the Observatory, it was not immediately clear if the attack was carried out by the American-led coalition that operates in the area or by Israel.

The strike on the arms depots triggered massive explosions that were heard throughout the area, according to the Observatory.

Earlier in the week, Syria accused Israel of conducting a series of airstrikes on targets in the area of Homs and Tartus in a rare early-evening attack on Monday. Syrian state media outlet SANA reported that two Syrian soldiers were wounded in the strikes, which also caused “material losses.”

Syrian media reported that the targets of Monday’s strikes were arms depots in Shayrat Airport near Homs and just outside the coastal city of Tartus. Satellite images from Tuesday showed significant damage to a warehouse located south of Tartus, indicating that it was the primary target.

Israel has refused to comment on the Monday strikes, in line with its policy of ambiguity regarding its activities in Syria. Despite the comments by the Russian official — Vadim Kulit, one of Moscow’s leading representatives to its ally Syria — Israel generally believes that Russia tacitly approves of its efforts against Iran in the country so long as no Russian forces are harmed in the process.

According to Kulit, the six F-15s fired eight missiles at targets in the area of Homs and Tartus. He claimed that six of them were shot down by the Syrian military with Russian-made air defenses. Israeli military officials, as well as civilian defense analysts, largely see these claims of high interception rates by Syrian and Russian official to be empty boasts.

A Lebanese news outlet, al-Jadeed, reported that debris from the Syrian anti-aircraft missiles that were fired at the Israeli jets crashed into the Lebanese village of Sahel Alma, injuring a woman and damaging a number of homes.

The strike on Monday was the third attack attributed to Israel in less than two weeks, and at least the sixth in the past month, marking a clear uptick in the number of strikes allegedly carried out by the Israeli military.

Israeli officials have expressed increasing concern over the proliferation of Iranian-made surface-to-air missile systems in Syria, as well as the Syrian military’s improved air defense capabilities, which have made it more difficult for the IDF to operate over Syria.

Israel has carried out hundreds of airstrikes inside Syria over the course of the country’s civil war, targeting what it says are suspected arms shipments believed to be bound for Lebanon’s Iran-backed Hezbollah terror group, which is fighting alongside Syrian government forces.