You are here: Home / Europe / Drone strikes by UK and Pakistan point to Obama’s counter-terror legacy 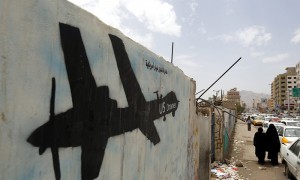 When the UK and Pakistan announced on Monday that they had each carried out lethal drone strikes against their own citizens, they followed a template sketched by Obama over the past seven years – one that critics have warned risks greater destabilization and legal abuse.

While a few other nations, particularly Israel, have conducted drone strikes in the past, experts have long warned that the proliferation of drone strikes would be inevitable after the US embraced them so enthusiastically early in Obama’s presidency.

The UK and Pakistan conducted their drone strikes in the US style: secretive attacks on an undeclared battlefield, rather than as part of an declared war.

“Those of us who have criticized the Obama administration’s targeted killing policy have long warned that other states cite it to attempt to justify their own legal violations. The concerns were, however, over Russia, China, and North Korea, not the United Kingdom,” said Mary Ellen O’Connell, a law professor at the University of Notre Dame.

David Cameron confirmed on Monday that the RAF conducted a drone strike on 21 August that killed two British citizens who had joined the Islamic State (Isis). The strike was taken outside the current US-led coalition targeting Isis in Iraq and Syria, making it an exclusively UK operation – and Cameron’s prerogative.

Cameron acknowledged that he ordered the strike in Syria despite parliament rejecting UK airstrikes on the country in 2013, albeit against a different enemy. But in language reminiscent of Obama’s, he told MPs that an assessed need to “prevent a very real threat to our country” was a prevailing factor, particularly after the attorney general issued a secret ruling blessing the strike as legal. All these factors distinguished the targeted killing operation from the drone strikes the UK has previously carried out on the declared battlefield of Afghanistan.

British ministers also signaled that the strike killing Reyaad Khan and Ruhul Amin was unlikely to be Britain’s last. Michael Fallon, the UK defense secretary, denied that the UK had a “kill list” equivalent to Obama’s “disposition matrix”. But Fallon said that “we would not hesitate” to kill others whom the UK understands to represent active terrorist threats, all without disclosing the evidence justifying that designation or subjecting it to scrutiny. It is likely that the British member of Isis known as “Jihadi John” is also a potential target for a British drone strike.

Cameron’s disclosure risked overshadowing another development in the history of drone strikes. On Monday, Pakistani military spokesman Asim Bajwa tweeted to say that the “1st ever use of Pak made Burraq Drone” had that day killed “3 high profile terrorists” in the country’s northern Waziristan – the epicenter of US drone attacks in Pakistan. The strike represented the achievement of an ambition the Pakistani military announced in March, indicating that it will not be Pakistan’s last.

Pakistani politicians have for years railed against the US strikes, even as Pakistan secretly provided the CIA with access to its Shamsi airfield. Bilateral acrimony grew so bad in 2011, particularly after the US raid to kill Osama bin Laden in Pakistan, that Pakistan kicked the US out of Shamsi. But neither US drone strikes in Pakistan nor Pakistani anger over them have ceased.

“The drone strike announcements were made before any public policy debate or discussion, and officials from both [Pakistani and British] governments have refrained from answering questions directly or providing clarifying information to know if their practice is aligned with their policy justifications,” said Micah Zenko, an expert on drones at the Council on Foreign Relations.

The Pakistani and UK strikes have vindicated the warnings of former officials that the US use of drone strikes “outside of hot battlefields is likely to be imitated by other states”, as a Stimson Center task force found in 2014. The task force, which included several retired military and intelligence officers, warned that such proliferation “may cause or increase instability, and further increase the risk of widening conflicts in regions around the globe”.

Pakistan is the latest member of a growing technological club of nations: those who have successfully weaponized drones. In addition to the US, UK and Israel, a recent New America Foundation report highlighted credible accounts that Iran, South Africa, France, China and Somalia possess armed drones, as do the terrorist groups Hamas and Hezbollah. Russia says it is working on its own model.

Yet it is not merely the possession of armed drones, a technological development, that marks a country as following in Obama’s footsteps. It is the use of them for what Obama calls “targeted killing”: identifying and marking specific people for death.

While the administration has portrayed its drone strikes as an alternative to a broader and bloodier military campaign, years of disclosures have revealed that “targeting” has amounted to killing military-aged males carrying weapons in areas where terrorists operate. At least 4,700 people have died in US drone strikes, according to a 2013 estimate by a US senator. At least four of them, Obama acknowledged that year, have been American citizens; a fifth American was killed in January. At least two of them have been hostages of Isis whom the US did not mean to kill.

The proliferation of a method of secretive killing that critics consider 21st-century assassination is probably not how Barack Obama sees his legacy.

Obama may prefer to consider that his lasting contribution to international affairs has been a landmark diplomatic accord to forestall an Iranian nuclear weapon, or the re-establishment of diplomatic relations with Cuba. Yet the UK and Pakistani strikes are a reminder that the US president’s foreign policy legacy will stretch far beyond his administration’s self-identified achievements.

“The US has already set a troubling precedent by violating international law in many instances through targeted killings; that the UK is now also willing to deliberately kill people outside of an armed conflict, and obfuscate the legal basis behind such killings, simply compounds the problem,” observed Andrea Prasow of Human Rights Watch.

“The law hasn’t changed, but US allies’ willingness to accept violations of the law may have, and it is a scary world for all of us if rules that govern lethal force can simply be tossed out the window.”