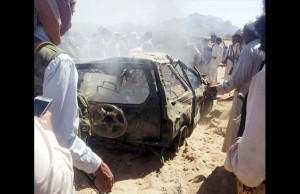 The drone “fired four missiles on three Al-Qaeda militants sitting near the port of Mukalla, killing them immediately” late on Tuesday, said the official.

The strike killed a “leading figure” within Al-Qaeda, the official said, without disclosing his name.

Al-Qaeda in the Arabian Peninsula (AQAP) has exploited months of fighting in Yemen between Iran-backed rebels and the beleaguered Saudi-backed government to consolidate its grip on Hadramawt’s provincial capital Mukalla – a city of more than 200,000.

The United States considers AQAP to be the extremist group’s deadliest global franchise and regularly targets its militants with armed drone strikes on Yemeni territory.

It is the only government that operates the unmanned aircraft over the impoverished country.